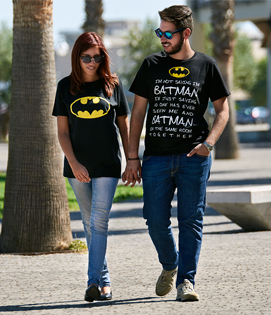 From comics to animated series, from movie productions to gadgets, superheroes are the absolute protagonists of DC Comics success, an American publishing house owned by DC Entertainment. The timeless charm of fantastic characters, like Superman, Batman, Green Lantern, Flash and Wonder Woman engages and excites readers of any age. In the ranking of the most beloved icons of all time Superman is placed, deservedly, on the podium, he is the first superhero in history. Published for the first time in 1938 by DC Comics, he has inspired a merchandising that boasts proposals of all kinds; many gadgets and accessories of common use that report the legendary ’S' that is printed on the blue costume of the hero from space. Another character who has conquered generations of fans for his tenacity in fighting crime is undoubtedly Flash, the superhero whose peculiarity is represented by the ability to move at a faster speed than light. His true identity lies behind a red costume and a mask of the same color on which stand out two small yellow wings. Our online store, within the DC Comics category, offers t-shirts, posters, backpacks, socks and keychains that bear the symbol that distinguishes the American superhero: the yellow lightning inside a white circle. Although the superhero scene of the comics is dominated by the male sex there is a superheroine that saves the female honor; it is Wonder Woman, an attractive character who fights thieves, criminals and spies, wearing a red bodice with an eagle printed on the chest and a blue shorts with the stars of the American flag; between the long hair a golden tiara, in the center of which stands a red star. It’s her costume that inspires t-shirts, swimsuits, socks, sweatshirts and accessories that are perfect for a superhero look. To the bat man lovers, aka Batman, and fans of Green Lantern, one of the most powerful superheroes ever created by DC Comics, the store offers a vast merchandising within which you can find breakfast mugs, wallets, caps, iPhone covers and action figures.

The Flash
Merchandise
Suicide Squad
Merchandise
More brand
Follow us on
Newsletter Subscribe to our newsletter. Exclusive offers right away for you.