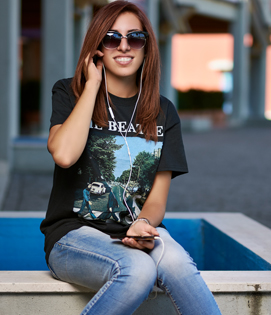 The Beatles, the band that changed the history of music

In our online store you will find an entire area dedicated to the English rock band Beatles which marked the beginning, since the sixties, of an Ideological and Cultural Revolution surviving to our own day.

The Beatles are born when two youngsters John Lennon and Paul McCartney cross paths on the Woolton Parish Church stage. From that moment, the magic began!

Since 1961, the band released their debut single "My Bonnie" and after being signed by the record company EMI, in October 1962, "Love me do" comes out. From that moment the Beatlemania begins . So much that in 1965, Queen Elizabeth II conferred them the title of Knight with an official ceremony at Buckingham Palace.

"Let it be" is their last album before the dissolution of the band, but history had already been marked.

With the Beatles merchandise you will always have your idols with you, ready to make you remember how much you love music and how you cannot live without it.

You can find in our online shop an endless list of gadgets tagged Beatles; there are also great gift ideas for the fans of this band which changed history of music. Keychains , action figures , block notes , glasses , postcards , caps , pins and posters of the Beatles are just a small part of what you can find in the section dedicated to them.

The Beatles clothing: the music you can wear

Not just gadgets but also clothes signed Beatles. For those who have too much objects on their shelves and who prefer something to wear, MerchandisingPlaza is the right place where you can find different types of clothing: jumpers and t-shirts of the Beatles for all tastes and kinds. Including the t-shirt with the iconic photo showing the band walking on the Abbey Road crosswalk which has made history of music (cover of the album of the same name), in men and women size and also unisex!

The quality of our store’s products

100% original, all of The Beatles products on MerchandisingPlaza benefits from the “money-back” guarantee and in the event of any failure to deliver, you can request an immediate refund.

For the orders over 150 euro, the DELIVERY is FREE!

The Beatles products in store