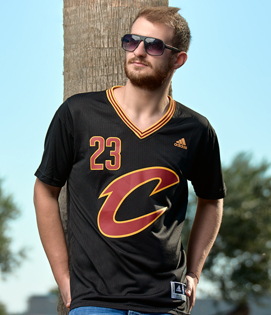 Born in 1891 in Springfield, Massachusetts, basketball is a widespread sport, followed and practiced mainly in the United States. It’s in the States, in New York, that in 1946 was founded what is now the most important professional basketball league in the world: the National Basketball Association, known to everyone as the NBA. It is no coincidence that the greatest basketball players in history have earned, deservedly, fame and prestige playing in the strongest teams of the US league. It is no coincidence, with the spread of sport worldwide, that a merchandising that offers all sorts of gadgets has developed around teams and basketball champions. The online shop is full of official products of the largest basketball teams in America, including the Los Angeles Lakers, the Miami Heat, the Boston Celtics and the New York Knicks. Full of proposals the section dedicated to the Los Angeles Lakers, within which stand the t-shirts and jerseys of the legend Magic Johnson, the playmaker with its 2.06 meters, atypical height for this role, won five NBA titles, leaving an indelible mark on the American league's history. The tank tops with the legendary number 32 are available in both adult and children’s sizes. Another basketball legend to whom the store dedicates most of the merchandising and accessories related to the Lakers is Kobe Bryant. Nicknamed and known by the whole world as the 'Black Mamba' he is considered the best American scorer; in the role of shooting guard he averages 25 points per game. Inside the section of the shop dedicated to basketball, you can find t-shirts, tank tops, shoes, caps, gadgets, bluetooth earphones and mobile accessories of the Chicago Bulls, the team that has the honor to count among its players a real legend: Michael Jordan.
The unforgettable number 23 of the Bulls is the NBA champion who inspired the basketball merchandising more than any other; everyone knows the famous shoe brand Air Jordan dedicated to him.

Boston Celtics
Merchandise
More brand
Follow us on
Newsletter Subscribe to our newsletter. Exclusive offers right away for you.