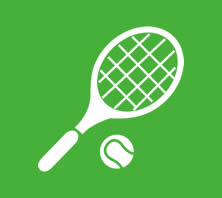 Tennis is one of the most popular and practiced sports in the world; in our country it is even fourth in number of registered practitioners. Recent statistics show that the percentage of those who choose it, both amateur and competitive, has increased considerably, and is likely to increase again over the next few years. In constant growth also the percentage of fans and people who follow on television, and if possible live, their idols and who are passionate to the point of externalizing the strong sports involvement also through t-shirts and gadgets dedicated to the tennis world. Of ancient origins, the sport that sees rackets and balls as protagonists has evolved over the years and has gained more and more popularity; Italians have started to become passionate about tennis quite intensely thanks to the successes achieved by Nicola Pietrangeli, first, and then by champions like Adriano Panatta and Corrado Barazzuti. Loved by women, men, children, young and old, tennis is an elegant sport that requires agility, speed, strength, coordination, endurance and alertness, qualities that undoubtedly the protagonists of the current tennis as Roger Federer, Novak Djokovic, Andy Murray, Stan Wawrinka and our beloved compatriots Andreas Seppi and Fabio Fognini possess in rather high percentages. It is to these champions that the online store dedicates most of the merchandising; many Tennis Stars calendars, accessories and gadgets to collect that show the face, the name or a detail of the sportsmen, Italian and foreign, participating in the four Grand Slam tournaments (Australian Open, France Internationals, better known as Roland Garros, Wimbledon Tournament and US Open). First of all Rafael Nadal, the beautiful Spanish tennis player at the top of the ATP ranking for years; to him the merchandising dedicates a large amount of posters and calendars that give fans beautiful images of the Mancor champion at the exact moment when he hits the ball with the racket and disorients the opponent with his powerful and precise aces.

Tennis stars
Merchandise
Follow us on
Newsletter Subscribe to our newsletter. Exclusive offers right away for you.